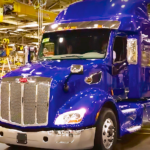 Class 8 orders in April sank to the lowest level since the fall of 1995, when orders went negative for two months, ACT Research reported.

Preliminary net orders were 4,100 compared with a year earlier when they were 14,859, according to ACT. They were the lowest since September 1995, when orders went negative as cancellations exceeded new orders, and that situation repeated in October.