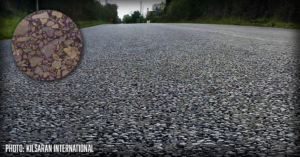 Stone matrix asphalt (SMA) is a gap-graded HMA (Figure 1) that is designed to maximize deformation (rutting) resistance and durability by using a structural basis of stone-on-stone contact (Figures 2-6). Because the aggregates are all in contact, rut resistance relies on aggregate properties rather than asphalt binder properties. Since aggregates do not deform as much as asphalt binder under load, this stone-on-stone contact greatly reduces rutting. SMA is generally more expensive than a typical dense-graded HMA (about 20 – 25 percent) because it requires more durable aggregates, higher asphalt content and, typically, a modified asphalt binder and fibers. In the right situations it should be cost-effective because of its increased rut resistance and improved durability. SMA, originally developed in Europe to resist rutting and studded tire wear, has been used in the U.S. since about 1990 (NAPA, 1999[1]). 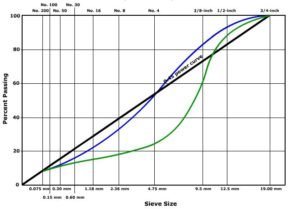 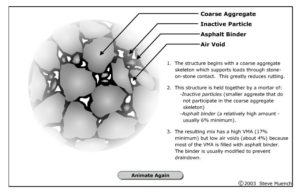 Figure 2. SMA Structure
Other Information
Because SMA mixes have a high asphalt binder content (on the order of 6 percent), as the mix sits in the HMA storage silos, transport trucks, and after it is placed, the asphalt binder has a tendency to drain off the aggregate and down to the bottom – a phenomenon known as “mix draindown”. Mix draindown is usually combated by adding cellulose or mineral fibers to keep the asphalt binder in place. Cellulose fibers are typically shredded newspapers and magazines, while mineral fibers are spun from molten rock. A laboratory test is run during mix design to ensure the mix is not subject to excessive draindown.

In mix design a test for voids in the coarse aggregate (AASHTO T 19) is used to ensure there is stone-on-stone contact.

Other reported SMA benefits include wet weather friction (due to a coarser surface texture), lower tire noise (due to a coarser surface texture) and less severe reflective cracking. Mineral fillers and additives are usually added to minimize asphalt binder drain-down during construction, increase the amount of asphalt binder used in the mix and to improve mix durability. 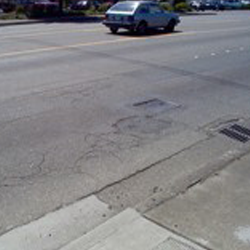 Figure 4. Dense-Graded HMA (left) vs. SMA (right). (it is a bit more shiny from the extra asphalt binder) 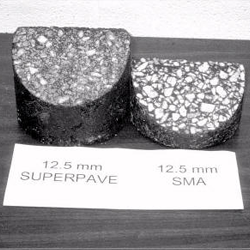 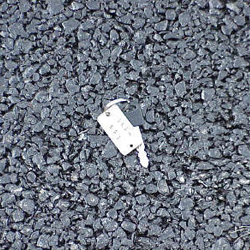