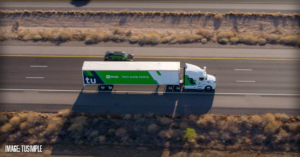 Level 4 autonomy (on a scale of 1 to 5) doesn’t require any action by a human driver and is widely considered the first level of “fully autonomous” driving.