Where Does Your Recycled Plastic Go? Perhaps Into Future Highways! 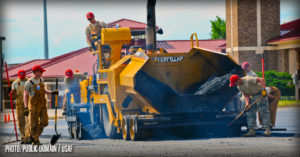 Until about a year ago, few people had reason to wonder where the plastic they tossed into the recycling bin ended up. It was being made into new bottles, bags, straws and beach balls, right?

Wrong: Almost half of it was shipped to China. Then, China announced last year that it didn’t want to buy the stuff anymore.

So, what should we do with all that plastic choking the world’s landfills? Why not recycle it and use it to build roads?

Bound together with plastic polymers, the asphalt will be cheaper and last longer than conventional pavement, according to independent experts. Story by Ashley Halsey III / www.washingtonpost.com.